Home > Case Studies > How I Take Part in Neighbourhood Watch: A Case Study

How I Take Part in Neighbourhood Watch: A Case Study 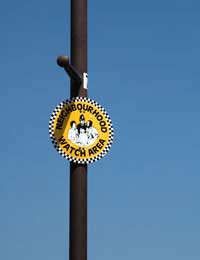 Alan Dettering enjoys the security of living in a safe neighbourhood but it wasn’t always the case. “Since we introduced Neighbourhood Watch it has really made a difference.” Up until 3 years ago there was no scheme in the area. “Gradually things were running down. There was graffiti on fences, some shrubs got vandalised and groups of youths had started hanging around the street corners at nights which was very menacing for me and especially for my wife.”

Setting up a scheme

Alan and his neighbours exchanged complaints about the situation but felt powerless until one of the neighbours decided to take a stand. “When a note came through the door inviting us to a meeting about setting up a Neighbourhood Watch Scheme I was definitely interested.” Alan and his wife attended the meeting and were impressed by the presentation given by local police. There was a good turnout for the meeting and a positive response to the suggestion of setting up a scheme in their street. “I was happy to throw my hat in the ring” Alan says. “I was keen to support anything to improve the safety of our street.”

Ways in which Neighbourhood Watch helps

At the event the police explained that there are four main ways in which neighbourhood Watch can benefit an area. These are in reducing crime, in helping police tackle reported crime, improving a sense of security and encouraging community spirit. “Our scheme has definitely helped in every one of these areas, I’m very glad to say.”

Alan and his wife both volunteered to join the scheme and were joined by many of their neighbours. “It did give me a sense of community spirit that so many of us were prepared to come forward to protect our street.” Regular training sessions were scheduled when police officers came along and gave briefings on crime prevention and household security. “It helped to feel that we were taking control of our environment and the police couldn’t have been more helpful.”

The neighbour who had first arranged the meeting became the area co-ordinator and invited Alan to join the Neighbourhood Watch committee. “I was glad to do so and happy to do my bit.” The committee meets regularly with local police to identify problems and target solutions. “We realised that the youths hanging about all belonged locally and had nothing to do so we campaigned successfully for the setting up of a youth group in the local community centre. We also got better street lighting at the end of the street so that people were less able to skulk there and commit vandalism.”

People take it in turns to be on duty and observe any activity that takes place in the street. They also look out for one another “there is a friendly atmosphere on our street and people take time to ask after one another. There are a couple of elderly people who live alone and neighbours make sure that they are well looked after.” Alan finds many benefits to living in a street with Neighbourhood Watch “Even our insurance premiums have fallen!”